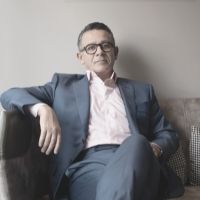 In 1995, he joined the Swiss Bank Corporation as Agent - Middle East and excelled in servicing and advising clients on various investment strategies. In 1998, George was appointed as a General Manager by Banque SCS Alliance Groupe (Beirut) where he systematised the marketing and business development in the Middle East until 2001.

In September of the same year, Union Bancaire Privée appointed him as Director of its Dubai Representative Office and, following a series of successful initiatives, as Managing Director in 2004. Two years later, George launched UBP Qatar LLC and led the company as its Chief Executive Officer. He furthered his ventures by serving Luxhabitat Sotheby’s International Realty as Chairman & CEO since 2013.

George strongly believes in the positive side of things. This leadership perspective yields to his success as one of the top-notch entrepreneurs who played a key role in elevating the status of Dubai on the global level.

George holds an MBA in International Business Administration and Finance, as well as a Bachelor’s Degree in Economics from the American College of Switzerland.